I've been playing with CreateSpace lately, for print-on-demand. I originally started down this road because I want to enter a Writers' Digest Competition for self published fiction. Problem is they want a physical copy. So I decided to create a physical version of An Untold Want.  Besides, it would be really nice to have a few copies on my bookshelves. I will probably end up doing Couillon as well.

This is what I've been working on: 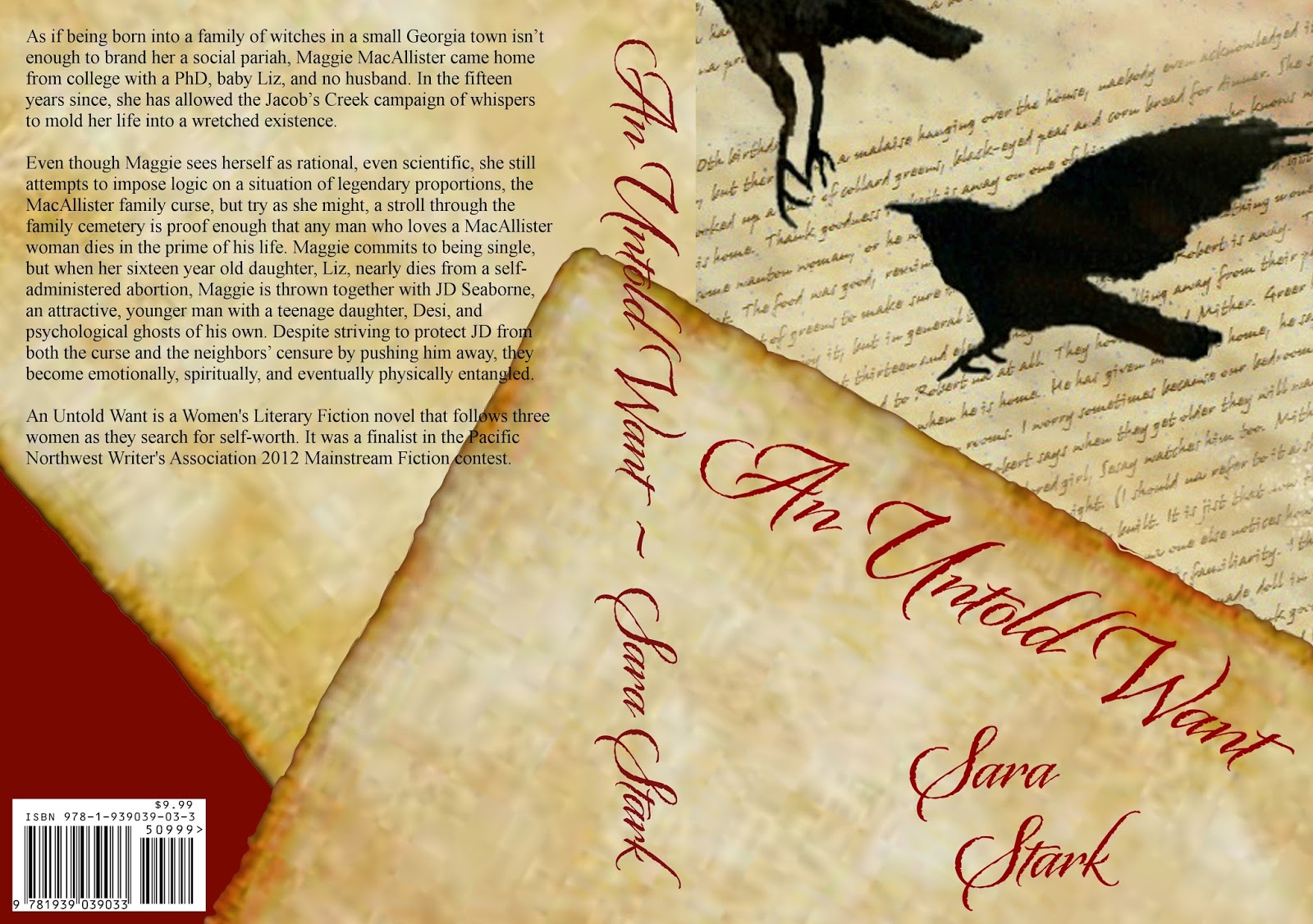 The image to the right of this text is very close to what the cover will look like. Of course with a physical cover, a back and binding image is required.  The image below is a new chapter page. 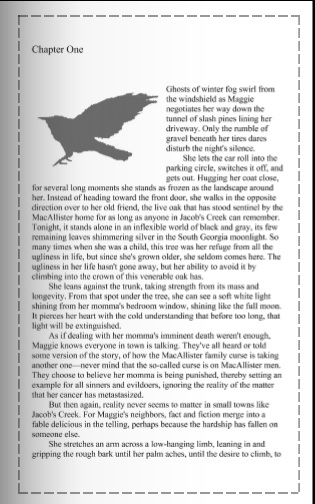 This whole process has been interesting and entertaining because it allows me to play with visual stuff. Plus I've learned a lot about publishing. Everything is different. Some of the formatting... Well let's say that formatting the page numbers and headers was a real lesson in patience. But the up side is that I can use images within the text, which is near impossible on a Kindle due to the fact that the reader can change font sizes.

An email went out today to all Indies Unlimited subscribers, one titled Sara Stark Wins Flash Fiction Challenge.   Yay, for me!! 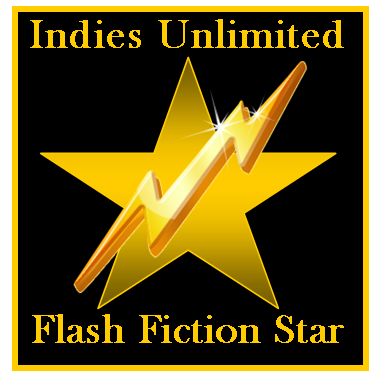 The text was as follows:

"Congrats to Sara Stark, the readers’ choice in this week’s Indies Unlimited Flash Fiction Challenge. The winning entry is recognized with a special feature here today and a place in our collection of winners which will be published as an e-book at year end."  Followed by a link to the story. [Same story listed on my last blog post.]

It feels great. It really does...

... but I have to be honest.  It felt more like a contest to see how many friends I could pressure into voting for me.  A lot of them did so before I asked, but I did ask several people to "go vote for my flash fiction entry". So to me it was a bit like cheating. Not that everyone doesn't do the same. If I didn't broadcast it, most of my friends would never know about it, because they're not writers.

I know, I know. You're asking yourself why I can't just be happy about it? Trust me, I am!  Inside, I'm turning cartwheels.  Outside, [regarding cartwheels], I'm too old for that stuff now.  So instead I'll have a nice glass of wine and bask in my own glory.

I just submitted an entry to the Indies Unlimited Flash Fiction Contest: Death for Sale.

The car was a 1954 Pontiac. Her first owner was Bill Keenan, a newspaper reporter for the Kansas City Star. 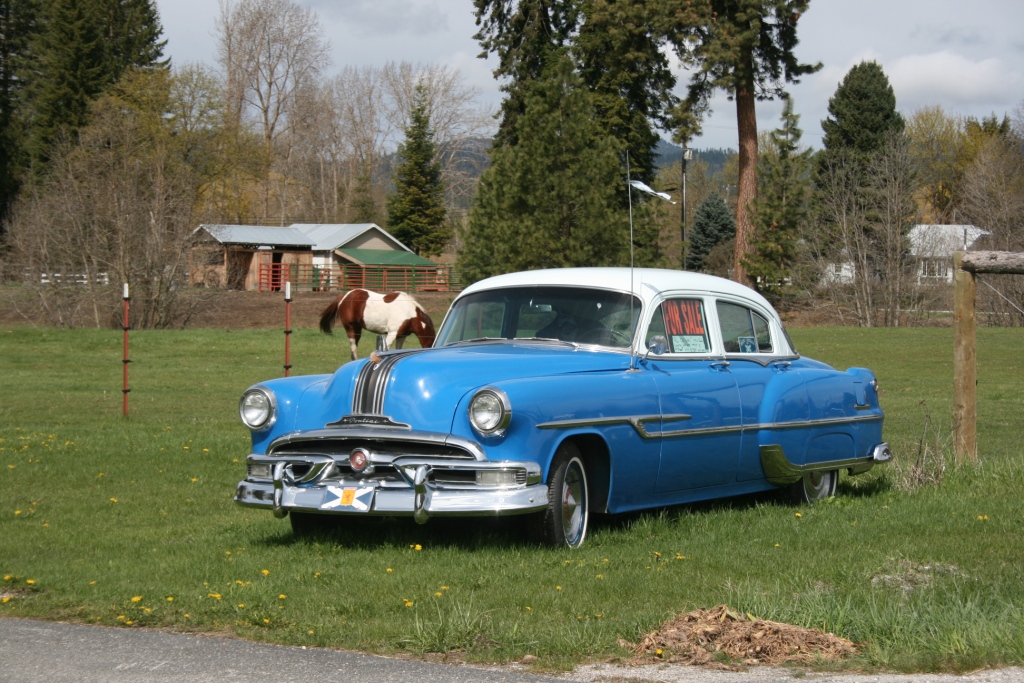 Bill drove the car home and his wife met him out on the front steps and shot him dead. She’d found out about Bill and his secretary.

Now, you can say that didn’t have anything to do with the car, and I guess you’d be right. Still, it seemed to have gotten the car off to a bad start. Over the years, she was owned by 13 people. Every one of those folks was murdered.

I don’t really consider myself to be superstitious, but I don’t see no reason to tempt fate, neither. That’s why I tried to talk Eric out of buying the car. It was useless, of course. He was in love with the thing.

In 250 words or less, tell us a story incorporating the elements in the picture.

It took me longer than I expected because I needed to do some research, but the research is a huge part of what I enjoy about putting together a story.  Anyway, below is what I wrote in response to the prompt.  I titled it Bit of a Poke.

"For Christ's sake, Eric, as if this old heap isn't bad enough, the steering wheel's on the wrong side," Fiona said. "What could possibly have possessed you to buy it?"

"The seller told me a great story."  Eric smiled the smile, the one that, long ago, had beguiled her into marrying him.  "Get this.  All thirteen owners died, uncannie like.  Murdered."

"And dunderheid that you be, you believed him. I dinnae ken what gets into you sometimes."

"The original awner, a guy named Bill from Kansas, well, his wee wife shot him the day he brung it home.  Apparently ol' Bill was giving his secretary a bit of a poke on the side."

"The seller swears a brollachan possesses this here motorcar.  Swears it pops out every now and again and enters a human's body. Poor awners always seems to get the warst of it."

She clenched her fists, digging her nails into her palms. "Really?"

"The second awner, another damn American looking to live in the Highlands, brung it over and, get this, he ended up being killt by an axe murderer. In the garage. Right beside it.  It's wickit.  A brollachan makes sense." He smiled again, darker this time. "And the murderers either weren't caught or convicted."

"So why the f--  Why would you buy it, you eeejit?"  She watched Eric's eyes go dark, then glow red.

"Did I forget to tell you, you unfaithful cow, I put the car in your name?"

First time ever, well since the inception of this blog, that I went a whole month without creating a single post.

What was I doing?  I've been sleeping a lot the past week because of  (1) getting over a bad cold, (2) going through withdrawal from cancer meds, and (3) a trip at Christmas to Georgia to visit my brother [who doesn't have internet access because of his youngest son].  Did I mention that my brother has four grown kids and a gaggle of grandkids.  And in-laws.  I don't do well in crowds.  But I love them all.  So I needed to rest when I came back. Fortunately, I wasn't doing all three at the same time.

But I'm back.  I just finished posting a story for an Indies Unlimited Flash Fiction Contest and I've been thinking a lot about how to structure Beryl's story.  Beryl's story, in my head, has undergone some major changes.  [That's what happens when you don't have the internet late at night for a week.]

You can see my entry to the contest in my next post.