So, I bought Scriviner.  My friend Joanne introduced me to it about two years ago, but it doesn't really do MS Word format, and at the time, I was sure I'd be able to get an agent, and agents require Word format.  C'est la vie.

I'm not saying you should buy it, but if you haven't heard about Scriviner, and you plan on e-publishing, you should check it out: http://www.literatureandlatte.com/scrivener.php

One of the perks that I just stumbled upon was that Scriviner counts how many times you've used words (e.g., realized) and provides you a list with the count.  This may not sound important unless you're a writer, or you've read a book where the author uses the same word too many times and it starts pulling you out of the story.  I have a bad habit, when I'm in draft mode, of doing that.  So this is a great tool for me.

Of course, I spent the better part of the day just getting comfortable with it.  But in the long run, I think it'll help.

Posted by Nellie at 3:34 PM No comments:

It appears that the sadness I'm feeling has stirred my creative mind.  I first starting writing as a way of pulling myself out the depression that grabs me at times and tries to pull me under, and so the same happened today.

I won't tell you what the new twist is in the New Orleans story, but I think it's a good one.

I've been writing this afternoon, and it feels good, or at least it lets me forget about how empty the house feels, about how no one is waking me up so that I'll move enough so she can lay her head on my shoulder, about how when I put the canned cat food down, there's no need to put the empty can on the floor because, unlike Pye, BlackBeary doesn't like to lick the dregs of gravy from the can.  I love BlackBeary very much.  She is my rescue kitty. I found her on a busy Dallas street and took her home when she was no more than a month old, but she's aloof, unlike Pye who was needy and demanding, and loving all at the same time.
Posted by Nellie at 5:28 PM No comments:

I may not be writing here for awhile, then again, I may be writing a lot.  Sadness is one of those unpredictable emotions that can stir or diminish the creative spirit. 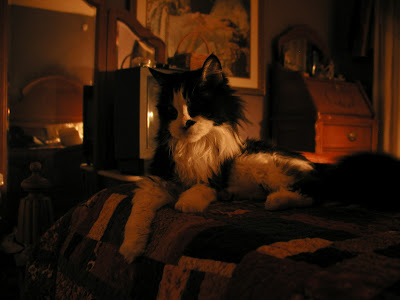 Today, I did one of the hardest things I've ever had to do, and I did it against my own needs, even though it doesn't feel like it.  I had Pye euthanized today.  It wasn't painful for her, and it was the right thing to do.  She had stopped drinking water, and when I finally got some fluids in her, subcutaneously, she ended up with pneumonia-like symptoms. She was emaciated and tired.  She had stopped cleaning herself, even though she was always such a fastideous girl.  She wasn't going to get better.  Sixteen year old cats don't get better, not from something like this.

She had a good life.  Her full name was Pyewackette Williamson and at sixteen years of age, she had lived in both Dallas, Texas and Seattle, Washington, had flown on a plane, and had been pampered like royalty.  She especially loved good Texas 'nip and licking the gravy dregs from the bottom of the cat food cans. In bed, she had a way of pushing on me, until I woke up, and moved so that she could lay her head on my shoulder.

Of all my kitties, she was my child.  She had my demeanor, grumpy, crusty on the outside, demanding, and no patience whatsoever. She had many looks. One was the do you mind? look.  When she was pissed, she had a look that could score cold steel.  But underneath all that she had a soft, gooey center that could melt my harshest reprimands to nothing more than a request that she be better in the future.

The thing I will remember most is her I meant to do that look which could make me literally laugh out loud. I wish I had that ability, that way of doing something silly and then walking away, head held high, proud, just daring anyone--even her momma--to point it out.

She was a princess, my princess, and I loved her very much. 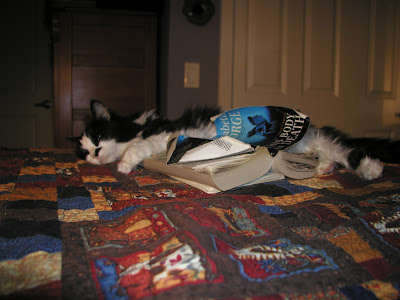 Posted by Nellie at 6:13 PM No comments:

I've been doing a bit of writing lately, although not as much as I should.  I still haven't shook this cough, but I did go and get a pertussis vaccination (for whooping cough).

Friday night, I made a huge pot of tortilla soup heavy on the heat (chili heat) and made with home-made chicken broth.  I slept a lot too this weekend.  And I'm feeling much better.  Which means I feel more like writing.

The New Orleans story is taking on a life of its own.  Finally.  You know that everything's starting to come together when you can see the characters.  So far, there are really only six characters in this story, but they're all larger than life.

-- Janice is the protagonist, the main person, and everything revolves around her.
-- Brad is the man she's in love with.
-- And then there's her Momma, who we never meet, but whose presence plays large in what happens in the story.  I know, you say, Momma seems to be in all of your stories.  She is Rose, the grandmother in Counting Crows, and now she's the mother in this story.  All true, but get over it.  This is my therapy, not yours.

There are also three outsiders:  Madam Marie, Antoinette, and T-Bo.

I have gotten to where I can see each and everyone of them.

Janice is a pretty girl--actually at age thirty, she's a woman, but she seems/acts more like a girl.  She's nothing special, you probably wouldn't look twice at her, which has made her a bit of a wallflower, but she has powers of attraction that she's totally unaware of. All she needs is a little self confidence.

Brad isn't a bad person.  He's a very good looking guy, but he's ego-centric, concerned about himself more than anyone else.  He likes to party and be the center of attention, not a satellite around someone else's gravity pool.

I could write reams about Momma.  She's a lot like Brad.  The word narcisst comes to mind.  Janice is just there to be a mirror, to reflect Momma's perfection.

Madam Marie and Antoinette, both work at Laveau Botanicals.  They are polar opposites.  Good vs. bad.  Fat vs. thin.  Motherly vs. Momma-ish.

And then there's T-Bo.  I just brought him into the story.  He's a good ol' boy who runs a gumbo shop called Cooyon's.  In Cajun, cooyon indicates a dumb, ridiculous, or silly person.  His shop is called Cooyon's because when he first opened, his pére said only a cooyon would be dumb enough to eat in a dump like that when there was beaucoup better places.

I won't say how T-Bo fits into the story, but he is a key factor in how it ends.

Oh, and how could I forget Pischouette, the cat that adopts Janice. [In Cajun, pischouette means mischievous little girl.] So I guess there's seven characters in my story.


For more on Cajun slang like cooyon, visit: http://louisianacajunslang.com/language.html
[Beware.  The damned cooyon put a bunch of wav files on the site, and it takes forever to load.  Also, he spells it couyon, but most of the places I've seen it, the word has been spelled cooyon.]
Posted by Nellie at 7:52 PM No comments: