Yesterday morning I got an email from one of the agents that I spoke with at the PNWA conference.  Understand that I had already sent him seventy-five pages, and before I opened the email, I prepared myself for another rejection.  But it wasn't.  He wants to see the full manuscript.

Here's the problem, and maybe the mistake I made.  I wanted to do a final read through, to catch any last typos and such, but I haven't had time, what with work and getting ready for this trip to Scotland.  So today, I sent the following email:

I'm leaving in a few minutes for a trip, abroad, will be back in early October and will promptly get the full manuscript to you at that time, in a MS Word format. I hope this won't be a problem as I'm really excited about this potential opportunity with you and Jim. It's just that I've been planning most of my life to go to Scotland, and here it is, two opportunities falling at the same time.

The reason I'm not sending the manuscript to you right now, is that I want to do one last read through. I want it to be perfect, well as perfect as I can make it.

So is it a mistake to take the time to make it perfect, or as I said as perfect as I can make it?  I hope not.  But if this agency is going to work with me, they'll come to understand my issues with perfection.

I'd rather take the chance of sending it two weeks late, than sending in something potentially full of typos.  I'd rather look like a fool than an idiot.

With that said, I'm off to Scotland.

Look What I Found...

Just searching the web for my stuff, you know, to see where it is in the search order, and found this: 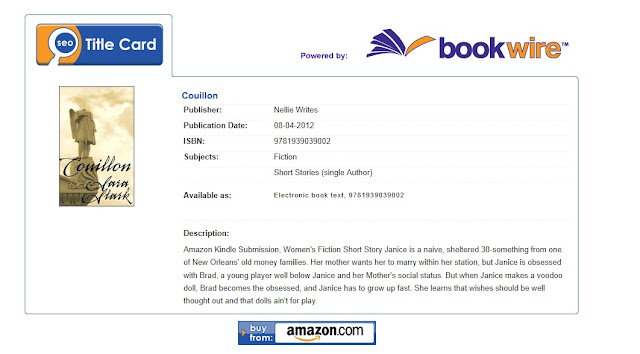 Am I Writing? No!

I think I've said this before, but I've all but forgotten what the beginning of the writing process is like.  So I feel antsy to write something, but have not put one word on the page -- not counting the backstory that I've been writing.   It feels weird, strange, odd, bizarre... get the idea?  But that is part of my process.  I stated last time that for me to start a scene I need to have it formed in my head first.

While I'm not writing, work -- my paying job -- has gotten in the way, a lot lately, and then there's all the marketing stuff to be done for Couillon.  I've been looking into, not only FaceBook stuff, but Pinterest and setting up my own web page.  A while back I bought the http://sara-writes.com domain, and tonight I played with setting up a page.  The marketing pieces will hopefully help me build an audience for not only Couillon, but for my novel, Counting Crows (or whatever it gets called), and for the novel that I'm not writing right now.

On top of that, I'm going to Scotland this coming Wednesday for two weeks.  And I don't really plan on doing a lot of writing there either.  This trip is like a pilgrimage for me.  My crazy mother never wanted me and my brother to know much about my father's side of the family.  It wasn't until I moved out of the house and my father was dying that I learned what I did.

My Grandpa Stark came over from Edinburgh when he was five years old.   Line #8, that's him. 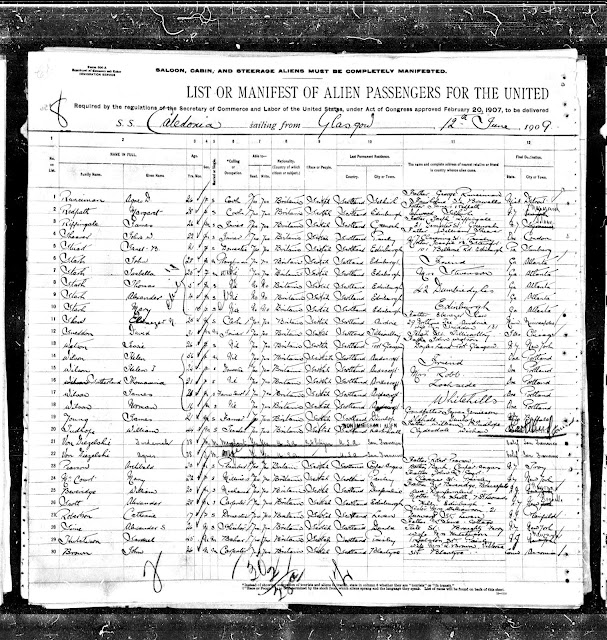 Needless to say, going to Edinburgh is one of the items on my -- yes, I'm going to use an ugly cliche -- on my bucket-list.  And it's only taken me fifty-plus years to make it happen.  I would love it if Daddy was still alive to go with us, but at least my brother, David, is going with me, and my friend Mike.

I am taking a notebook to write on the plane and to jot down any brilliant ideas I have while I'm there.  Drinking scotch has a way of boosting my creativity.  Or at least it makes me think I'm being creative... and brilliant.  And eloquent.

With that said, it may be a few weeks before I write here again.  But I'll be thinking about writing, building layers onto the new story, and fleshing out my characters.  And drinking some fine single-malt scotch while playing putt-putt at St. Andrews and looking for the Loch Ness monster.
Posted by Nellie at 10:49 PM No comments:

Tonight, on my Facebook page (https://www.facebook.com/SaraStarkWrites) I wrote:  "feelin' antsy like I want to write, but I don't have that starting sentence.  It's all still percolating in my head."

And that's what I've been doing all weekend.  I sit down to write, and nothing comes.  I'm not the type to just write without an idea of what it is I'm going to write.  I usually have the whole scene playing in my head and a good starting sentence before anything ever hits the page.  And I guess that habit hasn't changed.

I'm working on a couple of those scenes, but the main one that's building is the one where we learn about the relationship between Beryl and her father.   I can see how it begins, with her climbing the stairs to her room in the attic, but not sure where it goes from there.  There has to be some action involved, some movement of the story.  That's where the storytelling comes in.

So with that said, I'm off to day-dream, read, watch TV, meditate, listen to music, and all the other things that, for me, promote new story ideas.

Secret Entrance to the Cemetery 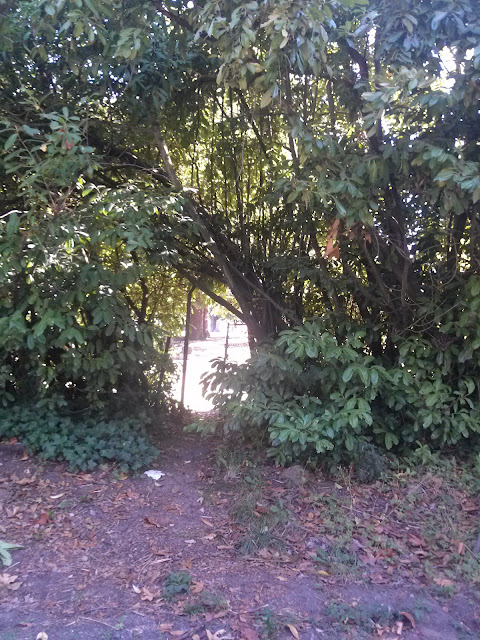 This is the secret entrance to the cemetery, from the street, that the cat led me to....
Posted by Nellie at 10:21 PM No comments:

My friend Kathleen and I visited some Seattle cemeteries yesterday.  The cemetery on Queen Ann (that's a hill in Seattle for those of you who don't live in the area) is perfect for my story. 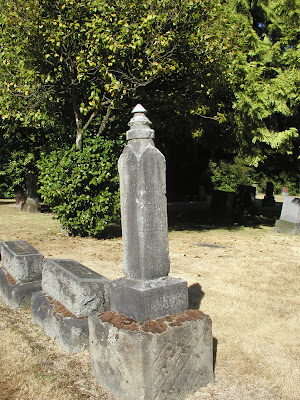 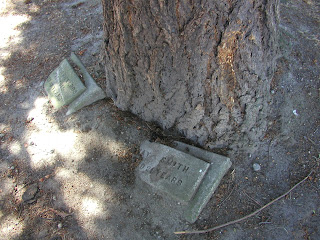 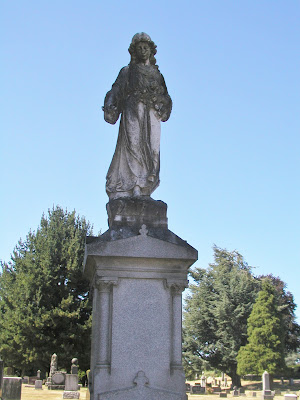 See the cat?  It led me to a secret entrace to the cemetery.  There's a hole through the hedges right behind the cat.  I know hard to see from this angle (and resolution), but it's there, a small path, just big enough for a human... or a cat. 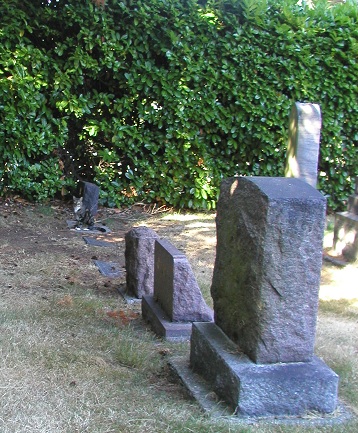 Posted by Nellie at 8:37 AM No comments:

BackStory and Other Stuff

It's Sunday, and here I am, writing my blog.  Sometimes I feel like these posts are the summaries or maybe the culmination of all the stuff I write on Facebook each week.  But where FB is a blub here and there, usually something stupid like Don't cha just hate it when, as you're drifting off to sleep, you have these brilliant thoughts and then can't remember them the next day? I had the best opening sentence, and now ... it's gone (today's FB post) while this blog is a place to compose my thoughts, to calm myself and think about what it is I'm doing.  Or should be doing.

This week I've been doing research on themes in my new story.  In my real life, I should have been a research assistant to some lab geek or maybe a lab geek myself, because I love to do research, love to learn new things.  The topics I've been researching are Native American lore, and on a completely different note, schizophrenia.  I never said my stories weren't complicated.  Mythology and legend, magic and metaphysical stuff -- intangibles -- are some of my favorite topics as is everything that falls in the category of psychology and how the mind works, all intangibles, stuff we don't really know for sure.  Is it real?  Is it true?  I think that's why my writing tends to merge mysticism with mental processes.  How the two affect each other intrigues me and plays big in my stories.

Continue Reading...
Posted by Nellie at 6:25 PM No comments: